I’ve worked on some weird projects. But one terrible idea went horribly right.

In my line of work as a comedian / voice-over / writer, I’ve had all manner of bizarre pitches.
When the economy is chugging along, it’s easy to say no to the super-weird. But when the economy is in tatters, it’s surprising at what I’ll say yes to.
- I’ve moderated a corporate event, in character as a tech expert.
- I’ve done my solo show in the front entrance of a public building – with the doors open.
- I’ve done a standup comedy show in the nose of a 747, dressed as Sinterklaas.
And these are the projects that turned out well.

…Then there are the projects that are too far-fetched to survive. I was once in the voice-over booth, when the client said,
‘Can you try it again, a bit more convincing?’ I was not convincing enough.
‘Can you try it a bit more authoritative?’ I was not authoritative enough.
‘Can you try to sound like Patrick Stewart?’
It was at that point I realized, ‘Are you looking for a British voice?’
‘Yes! Can you do that?’ No.
I should have known. But sometimes you can’t tell.

It’s alarming how long a project can survive, without anyone having a clear idea of what they want. So when I got the call for a ‘Fascinating Friesland’ voice-over, I was on Red Alert.

The call came via my management office. Some guy was looking for a native English speaker to come to Friesland for a voice-over.
I asked if the taping could be in Amsterdam.
‘Sure,’ was the answer. Hmmm… Way too easy.
I asked what kind of studio set up they had.
‘We’ll figure something out,’ was the answer. Again way too easy.
I asked about the text.
‘We’re still working on it… In fact, could you translate it?’
This was a recipe for disaster. So of course, I said yes.

2 guys showed up at the office: a guy about my age with a Croatian accent and a young Dutch guy, who turned out to be the intern. Mr. Croatian explained that he’d moved to Friesland years ago, and he’d gone native. He spoke English, Croatian, Dutch and – of course - Fries. He explained that the marketing department for the Province of Friesland had been almost completely laid-off. The entire tourism industry of Friesland was now down to 1 man. But he had just enough budget to make a funny, quirky online video.

Luckily, the text was okay. I translated it, punched it up a bit, and read it into the portable mic they’d set up. I told him, ‘with the right visuals, it could be like that video from last year “The Difference Between Holland and The Netherlands.”’ Amazingly, they wouldn’t give him permission to use their visuals. The publicly funded broadcaster ‘Omroep Vryslan’ didn’t feel the need to cooperate with Friesland Marketing. This gives new meaning to the term ‘Provincial.’

Sure enough, the producer found the images anyway. He released it yesterday, and today it already has about 50,000 views on YouTube. (And now, suddenly, Omroep Fryslan wants a copy.)

And so, if Friesland is to pull itself through this economic crisis, it may well be thanks to a Croatian immigrant, his Frisian intern, and an American Netherlander.

Are the Dutch actually the most wasteful in the EU?


All it took was one visit from Jacob Lew… The US Treasury Secretary was in Europe, arguing that we need more stimulus over here, and excessive budget cuts are counter-productive. Germany's Finance Minister smiled and nodded and disagreed with him as loudly as possible: 'Nobody in Europe believes that there's any problem with austerity.'
But - just 3 days later - the Dutch flipped the script. The Rutte Cabinet has now announced they're canceling the proposed budget cuts of EUR 4.3 billion; Germany and Brussels can go stuff their rules. What’s going on here?

It’s been a looong winter. In my personal financial experience, we’re still waiting for the first quarter to end. 1 April is Tax Day. It’s meant to be a fresh, new start for Quarter 2. Unfortunately, we’re still waiting for so many old invoices to be paid that we can’t turn the corner. Everyone is short on cash. Personally, I’d agree with the US: more budget cuts would be even more painful.

And that’s when it’s time for me to play Devil’s Advocate to my own idea. Surely there must be something good about economic pain we’re feeling? Just as I was entertaining this notion, another headline popped into my inbox: Dutch households have the highest debt-to-income ratio in the Eurozone.
http://www.business2community.com/finance/the-netherlands-becomes-next-casualty-of-the-eurozone-crisis-0458581
Of course, this is no surprise to me, since I’ve watched inflation rise (2nd highest in EU) as pay has stagnated.

But how can the Dutch have the highest debt-to-income ratio? Aren’t the Dutch famously stingy? And that’s where the budget-slashers may have a point: the Dutch are not nearly as stingy as they like to think. In fact, they can be wantonly wasteful.

I’ll use myself as an example of wasteful frivolity. Last week, I wrote about how my household carelessly threw away hundreds of euros on parking a car in Amsterdam. (The situation is now resolved, thank you.) But we also just got a warning from the electric company that our meter readings have been off the charts in the last 12 months. This may have something to do with the fact that my children are not content unless they have at least 3 screens glowing at any given time.

And my Dutch co-workers keep throwing out my bread. ‘Where’s my bread.’ I’ll ask. ‘What bread? Oh, that rubbish from yesterday? I threw it in the garbage.’ No, if bread is kept at all, it must be kept at room temperature until it is Not-Quite-Fresh bread. And Not-Quite-Fresh bread must be thrown out. And if you take the trouble to throw your breadcrumbs to the birds, they assume you must be Muslim. The front page of Het Parool recently stated that the amount of food disposed of by Amsterdam each day could feed a small city. (The fact that Amsterdam IS a small city proves that Parool really is Amsterdam’s newspaper).

Okay, Germany! You budget slashers have made your point. Maybe there is room for more efficiency and less waste. But shouldn’t we be able to increase our income a little as well? Can’t we compromise and find a 3rd way? Hopefully, as we can see, the Dutch polder model is alive and well.
Posted by Unknown at 8:51 AM No comments:

Want to carpool? Amsterdam wants to punish you.


Good news, Planet! I’m sharing a car. Bad news: we’re now playing a game called ‘How many times over can you pay to park your car?’ So far, the answer is: 5!

Living in Amsterdam, car-sharing seems the only appropriate thing to do.  Since my father-in-law lives in our building, we told him, ‘We’re sharing your car.’ Simple! With my wife & kids, we find ourselves using the car once every 2 weeks. My father-in-law uses it even less. When the time came to buy a new car, we thought ‘Why not do it together?’

Since I use the car for work, we decided to put the car in my name. Again, it seemed like the appropriate thing to do. We got the car home and felt like celebrating… until we realized the parking permit is still registered with the old car. In America, I think I’d have kept the same license plates and put them on the new car. Here, that’s not the case. To switch the old parking permit to the new car we’d have to visit the service center for the Cition Parking Company. Until then, we’d have to pay an hourly rate to park, just like everyone else.  In our neighborhood, it’s about 3 euros / hour.

Luckily, my parking app has no problem accepting a new license number. I use Parkline. My father-in-law uses ParkMobiel. We had no problem, until…

Problem 1: Cition Service Center says you can’t switch the parking permit to another owner. Even if you're sharing the car. There is apparently some logic to this plan. But all I understand is that I’m now paying an hourly rate to park 1 car, while we’re still paying a monthly rate to park a car that’s now somewhere in North Holland. We talked to the supervisor. Surely, this kind of thing has happened before? Surely, they’re not discouraging us from removing a car from the overcrowded neighborhood? Surely they’re not punishing us for doing the right thing?

Oh, but the punishment had only begun.
Problem 2: It turns out my father-in-law had also turned on his parking app.
Number of times we were paying for the car: 3. 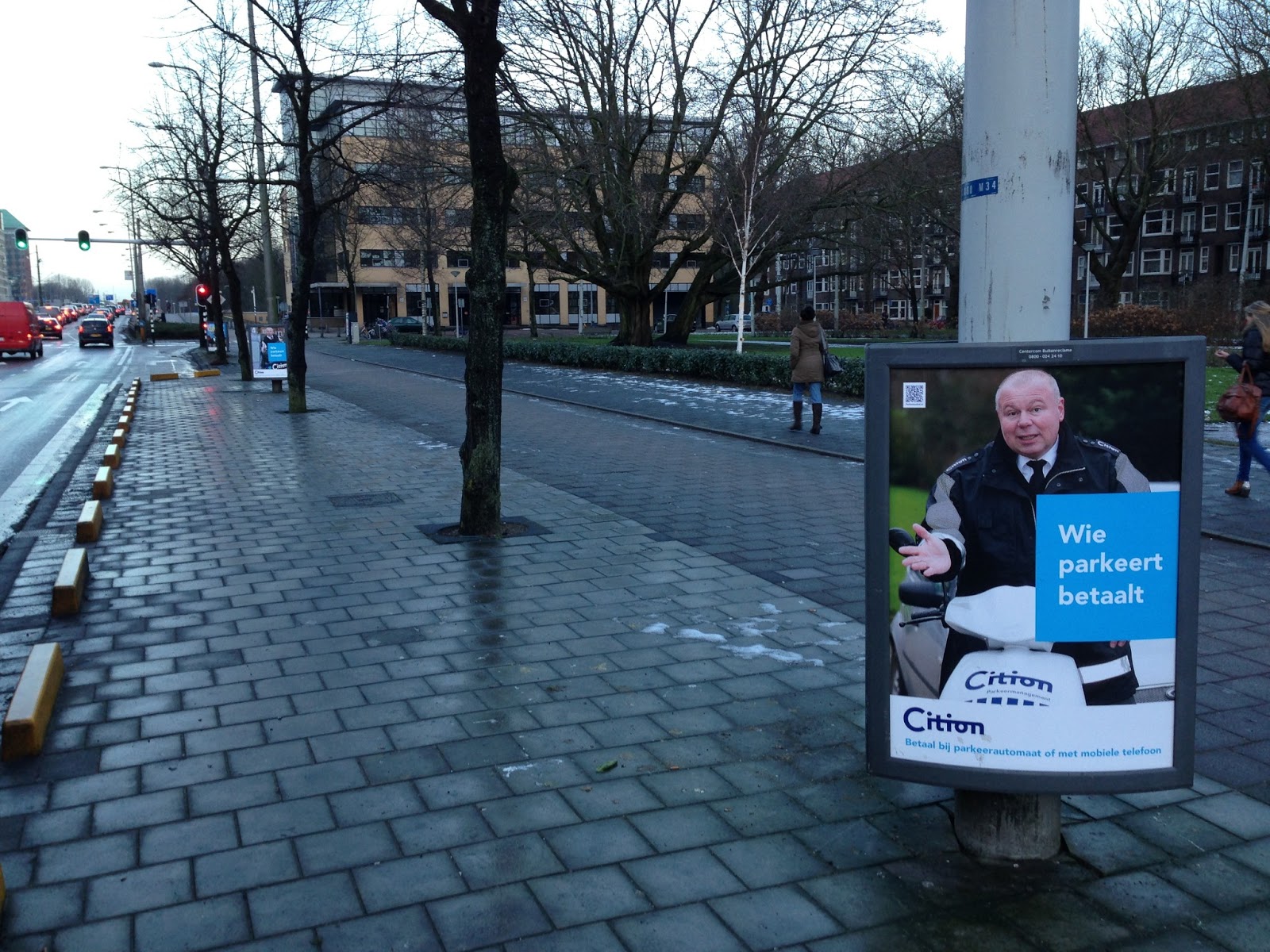 You may know Cition Parking Services from their recent ad campaign, ‘If you park, you pay.’ Their job is to raise revenue for the city. But apparently business is so good they actually have enough money left over for an outdoor advertising campaign. Just to restate the obvious. I’m also in the business of buying ‘ad routes,’ and I happen to know they cost thousands of euros a week.

Cition has been hired by the city to enforce the parking rules. But – as they love to point out – they don’t make the rules. That would be the stadsdeel and the City Council. I have a friend on the Amsterdam City Council, and I asked his counsel. His advice was this: ‘Good luck. I’ve tried to tell them I moved, but they keep sending fines to my old address.’

It turns out the easiest solution was to change the ownership of the car back to my father-in-law, negating half the reason for getting a new car in the first place. And while we’re waiting for the paperwork to go through, we noticed a jolly little conference of Cition agents partying around our car. They were abuzz with chatter about how many parking tickets they could put on the windshield before some schlemiel noticed. I joined my father-in-law in running over to the parking party to protest: we’re already paying 3 times over! But no…

And congratulations to Cition for all your extra revenue. Will they reinvest the money in improving their common-sense infrastructure? Nah. But hopefully they can afford a nice new redundant ad campaign soon.

Posted by Unknown at 6:19 AM No comments: