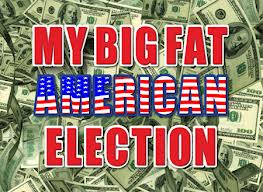 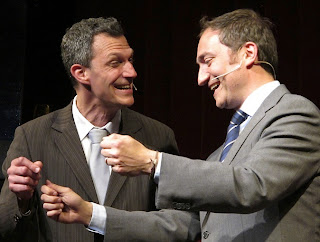 Now it’s time for ‘My Big Fat American Election.’ Never before has there been this much money in US politics. Never before has the media coverage been so much like a vapid American reality show. This year, we team up again with Michael Orton-Toliver and his Barack Obama imitation (to rival mine).

As Republicans, it’s not easy. Up against the first-ever black President, Republicans want to be seen as a party for more than just rich, white men. SO – they nominated the richest, whitest man imaginable. Mitt Romney. Much as I’d like to play Obama this year, I must admit I look more like Romney. He’s so white he makes Obama look black.

Does Barack Obama deserve another term in the White House? No! But he’ll get it anyway. Obama is like the boyfriend who means well, but just doesn’t listen. For your birthday, you tell him you want flowers & chocolate. And he’ll show up with Thai food & a Norah Jones CD. It’s very nice. It’s just not what you asked for.

Don’t give up, America! Like most girlfriends tell themselves at one point: I can change him!

I hope he can change. 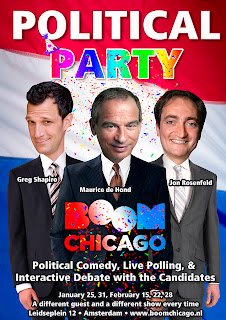 Another fallen Cabinet. Another national election. Time to resurrect “Political PARTY with Maurice de Hond” at Boom Chicago! The only show where Dutch politicians improvise with us onstage.

Every politician improvises by dressing up as another politician and answering questions.

SP.
Ronald van Raak played Mark Rutte. According to the SP, Dutch Prime Minister Rutte does not always tell the truth. He came out and said ‘Tonight, I’m trying something new. I’m not going to lie.’ Cue the Pinocchio video. Nice laughs.

PvdA.
Martijn van Dam played Mark Rutte as well. But he did it better. We covered the lying. But Martijn took it a step further. He played up the fact that Rutte & the VVD party are running a very negative campaign.
Don’t forget: the politician is not the only one in costume. While Martijn van Dam was dressed as Mark Rutte, I was dressed up as Martijn van Dam.
Here it gets interesting: Martijn van Dam got so into character as Mark Rutte that he started attacking his own party.  The attacks got more & more outrageous. Then he turned to me and said ‘Now Martijn, what do you have to say to THAT?’

He totally turned the tables on me. I just had to laugh. Well done.

Tofik Dibi gave a great interview. He acknowledged that there was no way he’d be reelected to Parliament, so he had nothing to lose. He admitted that it was a big mistake to challenge Jolanda Sap for the party leadership. He talked about texting with Geert Wilders – it’s easier than you think to get a response, since Wilders is so lonely. And he predicted that GroenLinks probably wouldn’t survive much longer, and they should merge with D66.

This is the American equivalent of saying “Don’t vote for me! My whole party is a joke! The Democrats should just merge with the Republicans.” Sacrilicious.

On the whole, the winner was PvdA Martijn van Dam. Congratulations! You got my vote.