In the process of performing our comedy show about Sinterklaas & Zwarte Piet, we’ve been getting lots of comments from Dutch people. What’s funny to me is how many comments make their argument worse.

The following are reactions to my quotes on DutchNews.nl & NRC.nl (translation by Google Translate / Shapiro)

- 'It's completely innocent. It's for little kids.'

If that’s true, then little kids should know the difference between blackface & black people. But – as my kid points out – it isn’t so.

After the show, a Dutch woman came up and asked ‘Are you making it up? The part about your daughter pointing to a black person as Zwarte Piet’ No! It happens all the time!

- ‘I was in a café yesterday where an African-looking man got laughed at. He took offense at a 4 year-old kid who called him Zwarte Piet. The kid was only 4 years old! The man told the parents they should tell their child the difference. No hat, no feather, no Zwarte Piet. They laughed. Then he said maybe he should go away to buy some gifts to give out. If you ask me, this man was asking for it.’

It makes me wonder what would Dutch people say if they’d move to another country with a lovable character called ‘Buck-tooth Dutchie’ where everyone dressed up as Anky van Grunsven.

‘But we love all you bony, buck-toothed square-faced Dutch people,’ they’d say. ‘And you don’t have the right to be offended.’

Here are some more Dutch people arguing that they are not racist.

- ‘Every year, you people feel discriminated because of a little black makeup? Show a little character.’
- 'These complainers are just hyper-correct white people or aggrieved descendants of slavery who look for a reason to complain. They're just the latest batch of moochers who would rather complain about nothing than do something with their lives.'
- ‘Non-white people who complain should start their own tradition of dressing up in sandals & long hair because they’re all doing one big hippie imitation.’

And then of course, there’s the personal:
- ‘Even more pathetic than this whole debate is Greg Shapiro himself. I’ve never heard him say anything funny. He would be wise to first address his utter lack of humor before lecturing his pedantic American finger at the rest of the world.’
- ‘Shapiro, it’s simple. Follow or traditions or get out.’
- ‘To be honest, you sound like a plum and you married a twat of a dutch woman. merry christmas numb nuts.’

But – like opening Pandora’s box – there’s always Hope. Some Dutchies do have a sense of humor.

And perhaps my favorite”

It's time again for the Annual Dutch Racist Parade! Every year, the kids line the streets for Sinterklaas and his entourage of black-faced minions.

Well, okay then. Why not dress up like this as well?

As the annual debate about Sinterklaas begins anew, this American Netherlander says: Why not a Sinterklaas Reboot? Specifically, why not take Zwarte Piet & give him a Michael Jackson makeover?


The reboot trend is everywhere.
Batman had a reboot. Spiderman had a reboot, just 10 years since his last reboot. Even Sinterklaas was reinvented by Dutch director Dick Maas. If you didn't see 'Sint' from 2010, it's the one where Sinterklaas is portrayed as a child-murdering psychopath.

So why not reboot Zwarte Piet? 'Oh, no!' cry the Dutch. 'You can't touch our beloved Zwarte Piet! He must be covered in blackface, or the children won't believe!' Dick Maas himself says it's okay for Sint to kill kids. Why not make  Zwarte Piet a shade lighter?

I've had this argument with both Dutch people and black people. Quinsy Gario is the founder of 'Zwarte Piet is Racisme.' He insists that the title is not a matter of opinion; it's a simple fact. I agree with him. But I don't agree with his remedy: Dutch people should admit that they've been racist & stop Zwarte Piet immediately. That ain't gonna happen.

There's a great precedent that everyone is ignoring. Neger Zoenen. These chocolate covered marshmallow cookies were called 'Neger Kisses' for years (or even 'Negerinne Tieten).
(Use your imagination).
But around 2005, someone had the good sense to ask 'why not drop the Neger?' Now they're simply called 'Zoenen.' Are Dutch families forever damaged? No. And they get to congratulate themselves for their famous Dutch common sense.

My recommendation: drop the Zwarte. Just make him Piet. Then the next year drop the Afro. The next year, the blackface becomes soot - which is how Mr. Piet is meant to have come by the blackface in the first place. 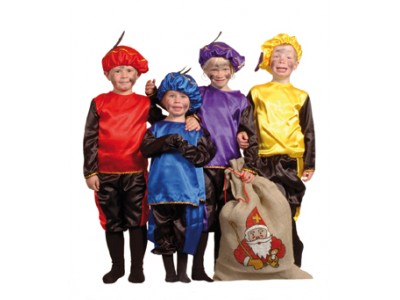 By then, - if anyone still complains that you've ruined their lives- THEN you can call them racist.
Posted by Unknown at 2:53 AM 1 comment:

When Hurricane Sandy Meets The Lowlands
(as written for DutchNews.nl)
3 Nov. 2012

After watching the devastation of Hurricane Sandy on America’s biggest city, I have to wonder ‘What happens when that storm hits the Netherlands?’ Will climate change force a Category 5 hurricane onto the low lands? What would that feel like?

The good news is – to imagine a hurricane’s aftermath – all you have to do is look at any major Dutch city. They all look like they’ve been hit by a hurricane already. It’s called Hurricane Bad Government.

If you want to feel like your city is recovering from massive infrastructure damage, just visit any Dutch train station: Amsterdam, Utrecht, and Rotterdam are all undergoing massive reconstruction at the same time. And Den Haag Central Station feels like it’s been hit by a hurricane, an earthquake and Godzilla thrown in.

When the Americans refer to Europe as ‘socialism at its worst,’ I sometimes think they have a point. There seems to be an enormous, government-sponsored make-work program for every street in the country. I call them ‘The Brick Flippers.’ More than once, I have seen a street ripped up, put back together, and then ripped up again a few months later. Why? ‘We have to be fair to both sides of the brick.’

Amsterdam in particular has been hard hit by Hurricane Bad Government. For 10 years now the hurricane has taken out everything from Central Station to the Rijksmuseum in a pattern we call The North-South Line. Amsterdam is literally taking all its money and throwing it into a gigantic hole in the ground. The Netherlands: a nice country, if they ever finish it.

If you’re like me, you’re constantly aware of the fact that we’re living under sea level. And you can’t help but wonder what would happen if we get hit by ‘The Big One.’ Luckily, it seems we’ve been having practice for years.
Posted by Unknown at 4:51 AM No comments: