This week, the Amsterdam city council announced it will no longer be using the term allochtoon. Instead, they’ll be using terms that are largely unpronounceable, which will probably result in everyone still saying allochtoon.

As an American, I’m technically allochtoon. So are my kids. Then again, we’re not really allochtoon. Because we’re ‘Western.’ Even though I’m writing this in English. In fact, my 3rd generation Moroccan neighbor speaks better Dutch than I do. But she gets called allochtoon & I don’t. What are they really getting at?

For a country based on tolerance and individual freedoms, it’s odd the way the Dutch love pointing out people who are different. Even if you happen to be eating in public, some Dutch person will always point at you and say ‘Eet smakkelijk’ – with a tone that is less ‘bon apetit’ and more ‘YOU’RE EATING IN PUBLIC!’

My kids go to Dutch schools. We quickly learned the difference between black schools and white schools. Black schools are the ones with the allochtoon kids. Surely Amsterdam will change this outdated terminology as well? Don’t hold your breath.

In Dutch schools, when someone has a birthday, they will sing any number of songs, including a lovely one to the tune of ‘Happy Birthday’ called ‘Hanky Panky Shanghai.’ The teachers will make slanty-eyed faces and make the children join in. Dutch kids’ books describe Cowboys & Indians, having no problem depicting the Indians as bloodthirsty savages. And don’t get me started on Zwarte Piet. Every year, the Dutch put on blackface and act like clowns. ‘It’s harmless’ they argue. Why? ‘It’s for the children.’ It sure is. They teach ‘em young.

Will the Dutch be able to grow out of the allochtoon phase? They’ve tried to replace allochtoon before. Last time they tried ‘Nieuwe Nederlander.’ It didn’t catch on. Why? Too many syllables!

Why not call people what they call themselves? Dutch Moroccans are Mocros. Dutch
Turks are Turks. And the French can be ‘Allo Allo.’

Or maybe the should just be honest about their phobias and call us all ‘Xeno.’  It’s a win/win situation, since the Dutch love Xenos (because it’s cheap). 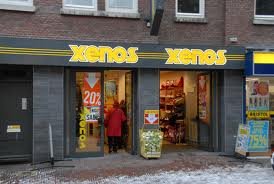